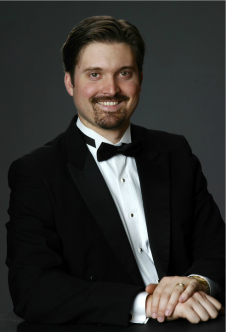 Dr. John Carter is a versatile music educator and clinician, having conducted bands, orchestras, choirs, operas and musicals at the elementary, secondary, university, community and professional levels. He currently serves as Director of Bands and chair of the Music Department at Loma Linda Academy, where he conducts four bands grades 5–12, several chamber groups, and teaches private lessons in French Horn.

Dr. Carter earned his Masters and Doctorate in Conducting at UCLA, his undergraduate degree in music at La Sierra University, and has participated in over half a dozen music festivals and workshops, including the Aspen Music Festival, Cabrillo Festival of Music, Conductor's Institute at Bard, California Conducting Workshop, Rose City Conducting Workshop, and the Conductor's Guild 2012 Workshop.

As a clinician, Dr. Carter has led workshops for the Loma Linda Academy and My Smilin' Violin String Music Festivals. In 2012 he led a three-day music education clinic and rehearsal demonstration at the Universidad Adventista de Chile in Chillán, Chile. Dr. Carter has also organized several tours, conducting at Walt Disney Concert Hall in Los Angeles and Grace Cathedral in San Francisco.

Dr. Carter lives in Rancho Cucamonga with his wife (a Loma Linda Academy alum), and has three sons—Rowan, Ashton, and Brandon. He is a volunteer firefighter and enjoys backpacking and photography. 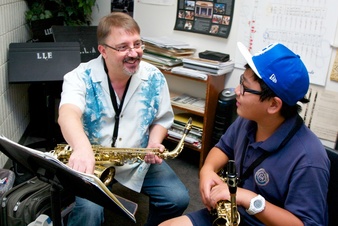 Kirk Udvardi is a freelance saxophone soloist and woodwind doubler. He has taught as an adjunct faculty member at La Sierra University, San Bernardino Valley College, and the University of Redlands. He presently is assisting Dr. John Carter in the Loma Linda Academy band program by directing the fifth and sixth grade bands, giving private saxophone, flute and clarinet lessons, and coaching saxophone and clarinet quartets.

Mr. Udvardi is also an active performer. He was highly praised by Saxophone Journal for his performance at the 1990 New Sounds Music Festival and was a frequent performer with The Barney Child's New Music Ensemble. He can be heard on Rastascan Records in performance with Dave Tohir and the Anything Goes Orchestra. He has made numerous appearances as a soloist with orchestras and wind ensembles in both California and Indiana. His book, The Complete Guide for the Musical Saxophonist, is published by Saxophobia Productions.

Mr. Udvardi is originally from Indiana, where he earned a bachelor's degree in saxophone and music education at Indiana University, South Bend. He subsequently completed master’s degrees in saxophone and woodwind doubling at the University of Redlands.  In 1988, Mr. Udvardi was the recipient of lUSB's Excellence in Music Award. At the University of Redlands, he received the Performance Award in 1992 and was elected to membership in Pi Kappa Lambda. Mr. Udvardi previously won the 1986 IUSB concerto competition, was a finalist in the National Association of Composers Young Performers' Competition, and a semi-finalist at the Fischoff Chamber Music Competition with the St. Alfonzo Saxophone Quartet